Check out the most relevant news and highlights in the current economic situation of the international market for alcohols and spirits in bulk. Do not miss the latest trends.
A historical tour of “Bodegas y Destilerías Vidal”
About us 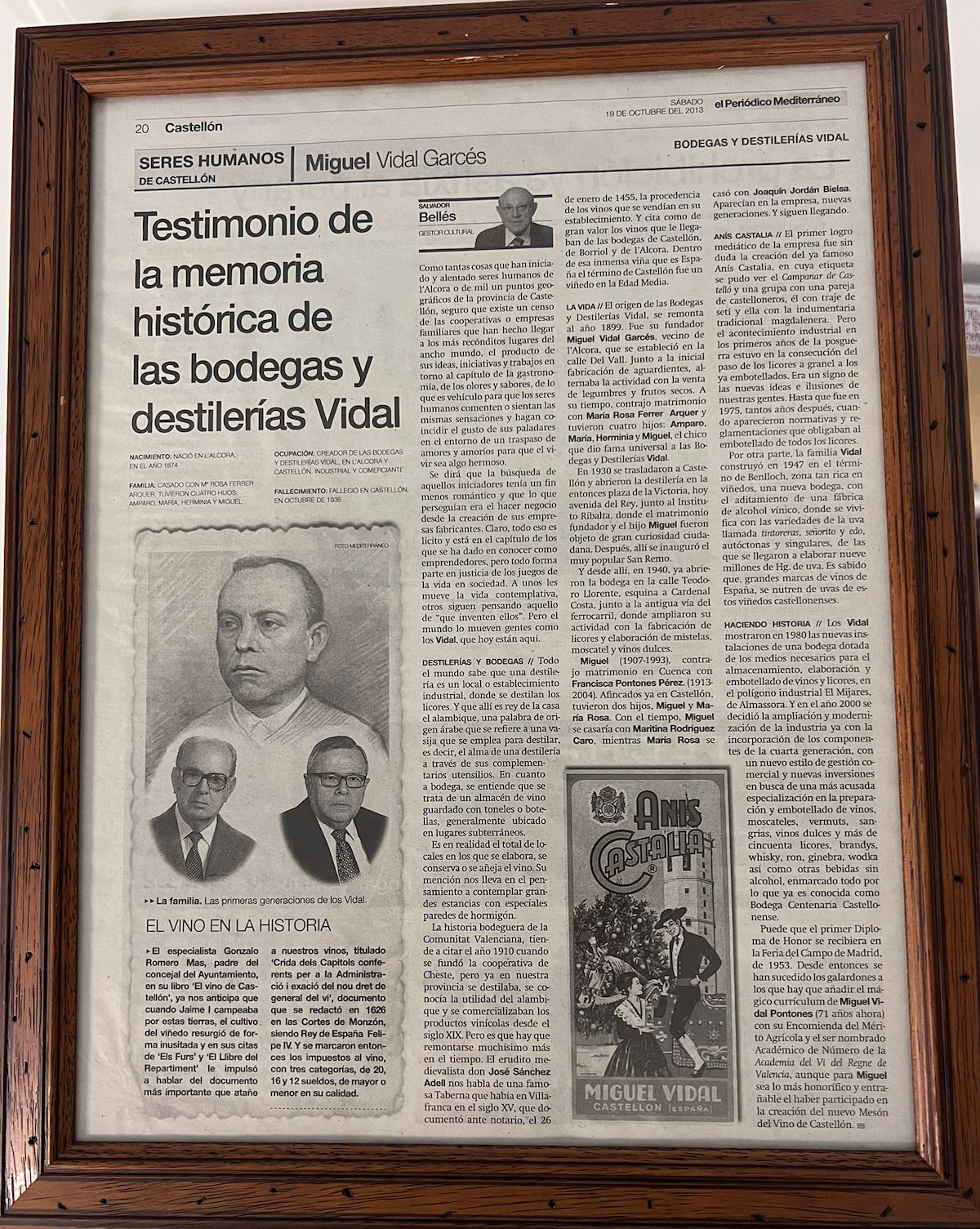 Bodegas y Destilerías Vidal was founded in 1899, when the great-grandfather of the current generation that runs the company built his first winery and distillery. Today, the great-grandchildren are still working in the winery, carrying on the tradition and values of the family: professional commitment, passion for perfection and dedication to quality.

The following article takes an interesting historical journey from the founding of the company to its current situation.

Bodegas Vidal, the origin of everything

The origin of Bodegas Vidal dates back to 1899. Its founder was Miguel Vidal Garcés, a resident of L’Alcora, who established himself in Del Vall Street. In addition to the initial production of eau-de-vie, he alternated this activity with the sale of vegetables and nuts. In due course, he married María Rosa Ferrer Arquer and they had four children: Amparo, María, Herminia and Miguel, the boy who brought universal fame to the Bodegas y Destilerías Vidal winery.

In 1930, they moved to Castellón and opened the distillery in what was then Plaza de la Victoria, now Avenida del Rey, next to the Ribalta Institute, where the founding couple and their son Miguel were the object of great public curiosity. Later, the popular San Remo was opened there.

And from there, in 1940, they opened the winery in Teodoro Llorente Street, on the corner of Cardenal Costa, next to the old railway line, where they expanded their activity with the manufacture of liqueurs and the production of mistelas, muscatel and sweet wines.

ANÍS CASTALIA // The company’s first media success was undoubtedly the creation of the now famous Anís Castalia, whose label featured the Campanar de Castelló and a rump with a couple from Castelló, he in a setí costume and she in traditional Magdalenera dress. But the industrial event in the early post-war years was the move from bulk liquors to bottled ones. It was a sign of the new ideas and hopes of our people. It was not until 1975, so many years later, that rules and regulations appeared making the bottling of all liqueurs compulsory.

On the other hand, the Vidal family built a new winery/distillery in 1947 in Benlloch, an area so rich in vineyards, where wine alcohol was distilled to make Brandies. There, the grape varieties called tintoreras, señorito edo and HDP (Hybrid Direct Producer), autochthonous and unique grapes, were used to make nine million hectoliters of grapes. It is well known that the great Spanish wine brands used grapes from these vineyards in Castellón.

Summarising part of the HISTORY // In 1980, the Vidal family showed the new installations of a winery equipped with the necessary means for the storage, production and bottling of wines and liquors, in the industrial estate of El Mijares, in Almassora. And in the year 2000 it was decided to expand and modernise the industry with the incorporation of the fourth generation, with a new style of commercial management and new investments in search of a more pronounced specialisation in the preparation and bottling of wines, muscatels, vermouths, sangrias, sweet wines and more than fifty liqueurs, brandies, whisky, rum, gin, vodka and other non-alcoholic drinks, all framed by what is already known as the Bodega Centenaria Castellonense (Castellon’s Centenary Winery).

Perhaps the first Diploma of Honour was received at the Feria del Campo in Madrid in 1953. Since then, there has been a succession of awards, to which we must add the magical curriculum of Miguel Vidal Pontones (71 years old now) with his Commendation of Agricultural Merit and being named Full Member of the Wine Academy of Valencia, although for Miguel the most honourable and endearing thing is to have participated in the creation of the new Wine Tavern in Castellón.

Miguel worked in the family winery as technical director for 16 years managing the purchase of raw materials, implementation of quality systems, R+D+I, and management of IIEE. He left the family business due to an accident at work and started as a wine agent, but it did not convince him as he could not lend his knowledge in the way he would like to. Later he ended up creating his own company: BULK WINE & SPIRITS, from where he offers specialised services in all types of spirits.

What inspired Miguel to create Bulk Wine & Spirits is the idea of helping to solve the problems he was facing in his family distillery, quality requirements and guarantees with suppliers. The business has grown a lot in these 11 years, due to the really good B2B contact we have (we contact people through other people/companies that recommend us). In addition, we have taken advantage of the digital wave we are in, we have been growing with it and that has helped us to open many doors internationally.

What makes us different?

What makes our business model stand out are our services, which are focused on optimising time for company purchasing managers, anticipating the requirements of each client, so that when clients require a specific product, we already have approved and audited suppliers at their disposal to speed up the process. In many cases, customers need Kosher certificates as well as other types of quality systems such as IFS, BRC quality systems so important in the industry today, therefore, we focus on suppliers that meet these requirements.

In order to satisfy the needs of our clients, we always like to understand the purpose of this demand, by means of a personalised study, which is fundamental: what is the final product for which this raw material is intended, what types of markets it is aimed at, what is its target public, types of qualities, prices, delivery times, periodicity, etc. Given our 26 years of professional experience in the industry, we offer different solutions and propose ideas that may be useful for the client, trying to solve any inconvenience without the need for the client to intervene and thus avoid cumbersome work.

In a world that is changing so rapidly, Miguel is committed to a more human and artisanal approach to the craft, based on the teachings of his ancestors, with the aim of guaranteeing a great experience to our customers by helping them to choose the raw materials and contributing to the creation of different, exciting and new spirits.

We have a wide range of committed and reliable suppliers, who can guarantee the customer not only consistent quality, but also continuity of demand. In particular the Whiskey and Bourbon market is one of the markets that Miguel is most fascinated by, as it is really easy and agile to work with the Americans. We have contact with distilleries of most Bourbon origins with different mash bills and ages.

The trust that the years bestow us is key for the customer.